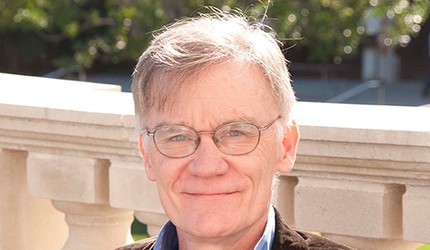 David William Blight, newly named as the Sterling Professor of History, of African American Studies, and of American Studies, is a renowned historian who is considered one of the nation’s foremost authorities on the Civil War and its legacy.

The Sterling Professorship is the highest honor bestowed on Yale faculty.

Blight is the author or editor of more than a dozen books, including “American Oracle: The Civil War in the Civil Rights Era” and “Race and Reunion: The Civil War in American Memory,” and annotated editions of Frederick Douglass’ first two autobiographies. He has conducted research on the life and work of Douglass for much of his professional career. His most recent book, “Frederick Douglass: Prophet of Freedom,” has garnered eight awards, including a Pulitzer Prize and the Bancroft Prize.

A graduate of Michigan State University, Blight earned a Ph.D. from the University of Wisconsin-Madison. He taught at Harvard University and North Central College (Naperville, Illinois), and for seven years was a public high school teacher in his hometown of Flint, Michigan. Prior to joining the Yale faculty in 2003, Blight taught at Amherst College for 13 years. At Yale, he serves as director of the Gilder Lehrman Center for the Study of Slavery, Resistance, and Abolition. In this role he organizes conferences, working groups, lectures, the administration of the annual Frederick Douglass Book Prize, and many public outreach programs regarding the history of slavery and its abolition.

Blight works in many capacities in the world of public history, including on boards of museums and historical societies, and as a member of a team of advisors to the 9/11 Memorial and Museum curators. His board memberships include the New York Historical Society, the Benjamin Franklin Papers at Yale, the National Underground Railroad Freedom Center in Cincinnati, the National Civil War Center at Tredegar in Richmond, Virginia, the executive board of the Organization of American Historians, and the board for African American Programs at Monticello in Charlottesville, Virginia.

The Yale professor lectures widely in the United States and around the world on the Civil War and Reconstruction, race relations, Douglass, W.E.B. Du Bois, and problems in public history and American historical memory. He teaches summer institutes for secondary teachers and for park rangers and historians in the National Park Service, devoting a good deal of time to these and many other public history initiatives.

Blight is a frequent book reviewer for The New York Times, Washington Post Book World, Chicago Tribune, Los Angeles Times, San Francisco Chronicle, Boston Globe, and other newspapers. He is one of the authors of the bestselling American history textbook for the college level, “A People and a Nation.” He is also series advisor and editor for the popular Bedford Books series in “American History and Culture,” featuring teaching books for the college level.

Blight was elected as a member of the Society of American Historians in 2002, and served as that society’s president in 2013-14. In 2012, he was elected to the American Academy of Arts and Sciences.